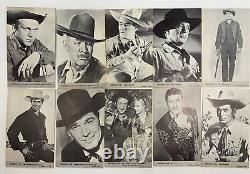 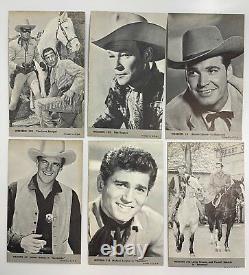 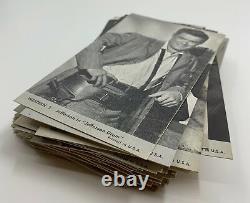 SET CONTAINS JOHN WAYNE, THE LONE RANGER, ZORRO, THE RIFLEMAN, ROY ROGERS, STEVE MCQUEEN, BONANZA, LASSIE, ETCIf you wish to see any particular card close-up, let me know and I will add it... These cards look like they came right out of the factory and would be an up grade for almost anyone... The display box that was sent to stores reads: Collect All 64 Cards... Here is an explanation as to why this is a 64 card set and not a 72 card set - from the Non-Sport Chat Line.

The first question of interest is how many cards are in a full set. Ron Hart and even Todd says there are 72. The answer is 64, as originally thought.

The eight so called short print cards were, in my opinion, never part of the set issued in the packs of three cards. In fact, the box indicates that there are 64 cards in the set.

Since the cards are skip numbered that is an important thing to tell the buyers. Nu Card was not trying to fool the buyers into looking for nonexistent cards like the companies did in the 1930's. Bobby says he has opened between 25 and 50 boxes of those packs, over the years and never found any of the SP cards.

He remembers that in the bottom of each box he bought, these were copies of a printed list showing the 64 card in the set. Those cards have enabled him to sell sets at the Philly and Boston shows and provide wholesale stock to other dealers over the years. The SP cards came about as a result of the LIL deal. Nu Card made up two military sets for LIL as part of this deal.

In addition, they made up a 27 card set of Western pictures for LIL. I cannot find a list of these cards although alanmiley reported in a 09/28/2018 post that he had obtained a card lot with all 27 of the LIL card types in it. However, thanks to some worth point references, in a post from 11/08/2020, I know that SP's 12 and 14 (and probably 13) appear in the LIL full bleed set.

This ties those numbers to the LIL printings. So those of you who collect the Western set have a complete set at 64.

The other, so called SP cards are part of the LIL deal. The details of that production would be interesting to know. However, collectors, like myself, do not have to go crazy and pay extreme sums to get the SP numbers since they are not associated with the base set.

That should be disappointing to those who own those SP cards because if they are not associated with the Western set they become a lot less valuable as only a LIL related item. LIL stands for Long Island Lighting Company. The item "1959 NU CARD WESTERN COMPLETE 64 CARD SET IN CRISP NEAR MINT CONDITION" is in sale since Monday, July 19, 2021. This item is in the category "Collectibles\Non-Sport Trading Cards\Trading Card Singles". The seller is "030190" and is located in Middleton, Massachusetts.