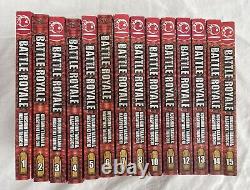 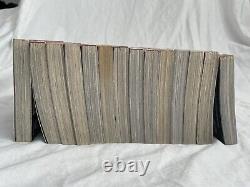 Battle Royale Manga Lot NEAR COMPLETE Vol 1-8 and 10-15 English. Near complete lot of English Battle Royale manga, only volume 9 missing. All books in good condition with normal wear as seen in images. This manga adaptation of the popular and controversial Japanese film offers back stories before plunging into brutality and gore. Forty-two ninth graders embark on what they think is a graduation camping trip.

Unbeknownst to them, they've been taken to the practically deserted island of Okishima to serve as the next contestants on The Program, a state-sponsored reality tv show. The show's premise is simple, if terrifying: within three days the participants must kill each other until only one student remains.

But there's a twist: the students have been fitted with high-tech collars that track their vital signs. If central command detects no one has been killed within 24 hours, it will detonate the explosive bomb collars and kill them all. Each student receives supplies and sets off.

Survival of the fittest becomes the greatest equalizer, since the teens are from all walks of life: the loner, the spoiled rich kid, the class clown, the daughter of a high-ranking official and even a few orphans. As protagonist Suuya struggles to protect himself and his romantic interest, others try to outwit and kill one another. Friendships and allegiances come into question and reveal duplicity, betrayal, loyalty, cowardice and insanity. Taguchi's straight-ahead storytelling and Giffen's superior adaptation make the gore easy to follow. The book's scenes of torture, implied rape and killing combine the horror and extreme violence of A Clockwork Orange with Lord of the Flies' exploration of human nature and depravity and aren't for the faint of heart.

This item is in the category "Collectibles\Comic Books & Memorabilia\Manga & Asian Comics\Single Volumes".drinnen" and is located in this country: US.