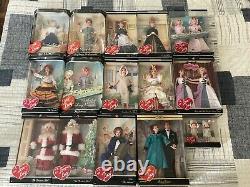 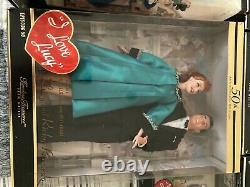 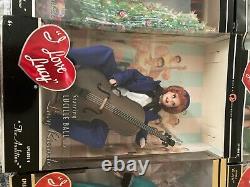 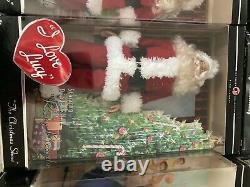 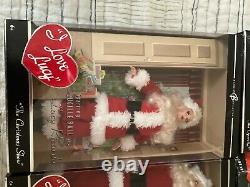 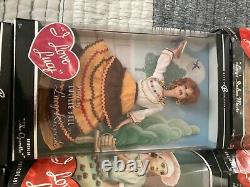 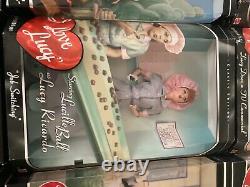 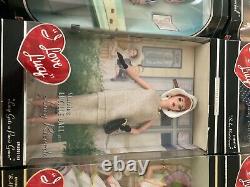 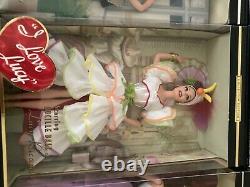 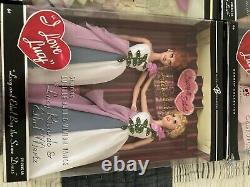 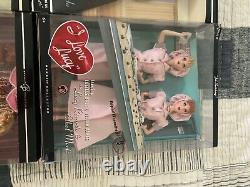 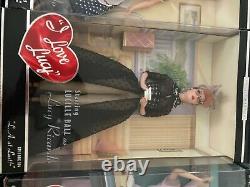 MATTEL I LOVE LUCY BARBIE DOLLS NEAR COMPLETE COLLECTION LOT OF 19 DOLLS NRFB. Third in a series featuring Lucille Ball as Lucy Ricardo in the classic "I Love Lucy"® show, this authentic reproduction features Lucy in the hilarious episode in which she stomps grapes in an Italian vineyard. Lucy is dressed in a white peasant blouse, purple skirt and vine-patterned hair scarf. In her hand, she holds molded grapes.

Accessories include "grape" earrings, a black belt and black shoes. LUCILLE BALL AS LUCY RICARDO. Here is the first collectible Lucy doll created by Mattel to authentically reproduce the famous episode where Lucy Does a TV Commercial. The doll's lifelike appearance and smiling face will evoke nostalgic memories of Lucy's hysterical performance attempting to sell Vitameatavegamin.

Lucy is dressed in an amazingly accurate re-creation of the black and white "houndstooth" ensemble she wore to do her commercial and even holds a "bottle" of the "powerful cure-all" Vitameatavegamin and a spoon for tasting. She proves laughter really is the best medicine. Timeless and eternally hilarious, "I Love Lucy"® remains a benchmark of comedy. In the memorable "Sales Resistance" episode originally broadcast in 1953, Fred, Ethel and Ricky reminisce about a sales experience. Ricky explains how to resist a salesman and insists that she return the item.

Ricky agrees to return the new item himself because Lucy cannot resist a salesman. Lucy and Ethel leave to go to the movies so Lucy can avoid another sales pitch. And the notorious penny-pincher Fred bought a washing machine! Lucy enjoys a last happy moment with her Handy Dandy vacuum cleaner wearing a navy and white polka dot dress with a white apron.

At least that's what Lucy thinks in the episode L. But after a disastrous encounter with William Holden at the famed Brown Derby Restaurant, she's not so sure. Especially when Ricky invites Holden up to their hotel room to meet his biggest fan, Lucy. Mortified by her previous encounter, Lucy runs to the bedroom and disguises herself with glasses, scarf, and an oversized putty nose, which she manages to catch on fire, and then comically extinguishes in a cup of coffee! Lucy wears an authentic re-creation of the episode's costume, which includes a black chiffon coatdress with black dots over a tan jumpsuit.

Silvery dots adorn her waistband and a large bow at the collar to coordinate with her dangling earrings. She has rooted eyelashes underneath tortoiseshell glasses that rest on an over-sized, protruding nose. Curls of her signature-red hair peek out from the tan kerchief that completes her disguise. Job Switching, episode 39, originally broadcast on September 15, 1952 during.

Today, this wacky story remains a favorite and is re-created in this delightful giftset. Both dolls wear pink dress coats, pink baker's hats, and pink heels. Check out the face sculpts each doll looks as though their faces are "stuffed" with chocolates! Rooted eyelashes and fantastic face paint provide the finishing touches.

I Love Lucy® has been charming television viewers since 1951. The show is interrupted by moving men repossessing sets and costumes and Lucy is carried off stage, singing and slapping her tambourine. I LOVE LUCY STARRING LUCILLE BALL AS LUCY RICARDO "JOB SWITCHING". Second in a series featuring Lucille Ball as Lucy Ricardo in the popular I Love Lucy Show, this doll is an authentic reproduction of Lucy in the episode, Job Switching arguably among the funniest and best-remembered Lucy shows. Who can forget the chaotic hilarity as Lucy and Ethel work on a candy production line? Lucy's authentic uniform from the chocolate factory is a short-sleeved, light gray dress with tailored waist and pink trim collar and cuffs. A matching light pink chef's hat covers Lucy's curly red hair, and a double-strand faux pearl necklace and matching stud earrings adorn her expressive face. The doll features different sculpting from the first Lucy doll big blue eyes, rooted eyelashes, painted red fingernails, and, of course, that inimitable Lucy expression. LUCY GETS A PARIS GOWN. Episode 147, "Lucy Gets a Paris Gown", originally aired on March 19, 1956. The Ricardos and the Mertzes are thrilled to be in Paris. As a special treat for Lucy and Ethel, Ricky snags coveted tickets for a Jacques Marcel fashion show.

Of course, after seeing the designer's clothes, Lucy vows that she will have a Jacques Marcel dress. When pleading fails, Lucy goes on a hunger strike. Ricky breaks down and buys the dress, but then discovers that Ethel is sneaking food to Lucy. As revenge, Ricky and Fred design potato sack dresses, complete with Jacques Marcel labels and a horse's feedbag hat for Lucy. The French designer sees the women wearing the dresses at a café and Ricky confesses.

In a hilarious final twist, Jacques Marcel steals the designs after Lucy and Ethel destroyed their originals! The fifth Lucy doll comes from the memorable I Love Lucy® episode Be A Pal. In this particular scene, Lucy re-creates Ricky's childhood home of Cuba, wearing a white Spanish-style dress with ruffles and different colored edging that's lined in red percale. Atop her signature red hair rests a headpiece with "fruit" and feathers.

Accents include golden earrings and matching bangle bracelets, and green shoes. The first ever Mattel-made Lucy and Ethel gift set is finally here! I Love Lucy® has made television history as one of the most enduring, beloved shows of all time, and with good reason: what's not to love about the show that followed the silly antics of zany redhead Lucy Ricardo, her blonde best friend Ethel Mertz, and their equally hilarious husbands? Capture the memories with this adorable set, inspired by episode #69.

Which originally aired on October 19, 1953. Hilarity ensues when the sidekicks arrive onstage in identical frocks a fashion faux pas to be sure! The lovable duo is portrayed here in chiffon dresses of lavender, gray and white, adorned with floral details and the characters' signature hairstyles. An absolute must-have for Lucy lovers and Barbie® fans alike! "The Christmas Show", also known as "Jingle Bells" or "The Lost Episode, " was filmed on November 22, 1956 and originally aired on television on December 24, 1956. This unique show featured flashbacks to scenes from favorite previous shows interspersed with new footage. It's Christmas Eve at the Ricardo apartment and Little Ricky, dressed for bed, grills his parents about how Santa works. Finally satisfied that his presents will be delivered, he goes off to bed. The Mertzes soon arrive with a beautiful tree. As the friends trim the tree, they reminisce about their times together.

They remember when Lucy told Ricky she was pregnant ("Lucy is Enceinte"), singing in a barbershop quartet ("Lucy's Show Biz Swan Song"), and the night Ricky was born ("Lucy Goes to the Hospital"). The next morning, the four adults are up early.

Meeting up in the living room, they realize that they had all dressed as Santa. Not wanting to disillusion the boy, they run to hide in the kitchen where a fifth Santa joins them. Hesitantly, they pull the white beards off each other to reveal Ethel, Lucy, Fred, Ricky They pull the last beard, whose wearer replies ouch!

" As the "real" Santa disappears before them, the amazed quartet turn to the audience and say, "Merry Christmas, everybody! I LOVE LUCY STARRING DESI ARNAZ AS RICKY RICARDO. The Barbie® Collector I Love Lucy® series continues with its 15th edition, and its first-ever solo Ricky Ricardo doll!

Has captured the hearts of television viewers since its very first episode in 1951. Which was the hilarious sixth episode of the premier season, was the first time in the series that Lucy Ricardo was shown trying to get into one of bandleader hubby Ricky's acts a plotline that became a recurring and perpetually entertaining aspect of. In this episode, despite Ricky's numerous attempts at keeping her out of the spotlight, Lucy finds a way to step in for an injured Buffo the Clown. Through a series of jokes, quips and brilliant physical comedy, Lucy steals the hearts of the talent scouts in the audience, who ignore Ricky's talent and offer Lucy a contract instead!

LUCY & RICKY 50TH ANNIVERSARY GIFTSET. Fifty years ago during the Golden Age of Television, Lucille Ball and Desi Arnaz created an incredible comedy series. I Love Lucy® premiered on October 15, 1951 and quickly became one of the most popular and beloved shows in the history of TV. The adventures of the irrepressible redhead and her Latin loveboat husband, Ricky, charmed America and the world, winning over 200 awards and consistently topping the ratings for six years. In the 50th episode, Lucy Is Enceinte Lucy discovers, much to her delight and amazement, that she is going to have a baby! Her whole life, she has dreamed of a romantic moment, sitting on her husband's lap, cradling his head in her arms, and softly sharing her news. As always, Lucy's plans go awry. She hatches a plan and goes to Ricky's nightclub, The Tropicana.

At the door, she asks the maitre d' to give the bandleader a note, which requests he sing his song We're Having a Baby, My Baby and Me. " Ricky begins by singing "Rock-A-Bye Baby to the audience, walking amidst the tables, trying to find the expectant parents.

Happily, tearfully, Lucy finally shares her news with Ricky and the world! This charming giftset capture the essence of that moment for fans everywhere. I LOVE LUCY KELLY DOLLS.

This enchanting giftset features two Kelly® dolls as Lucy and Ethel in episode #147 Lucy Gets a Paris Gown. " As Lucy, Kelly® doll looks downright darling in her "burlap dress and floppy hat. As Ethel, Kelly® doll is equally delightful in a similar "burlap" dress and bucket hat. Their ensembles, expressions, and accessories perfectly capture this hilarious and infamous episode! The item "I LOVE LUCY BARBIE DOLLS NEAR COMPLETE COLLECTION LOT OF 19 DOLLS NRFB" is in sale since Tuesday, August 25, 2020.

This item is in the category "Dolls & Bears\Dolls\Barbie Contemporary (1973-Now)\Barbie Dolls\Hollywood Barbie & Friends\I Love Lucy". The seller is "blue_fairy_toys" and is located in Brooklyn, New York. This item can be shipped to United States.