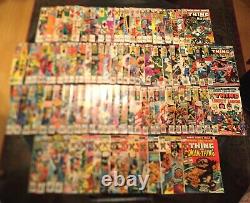 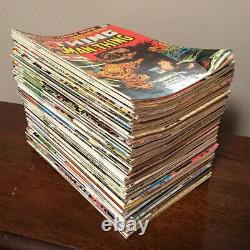 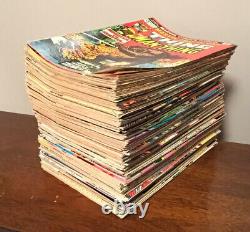 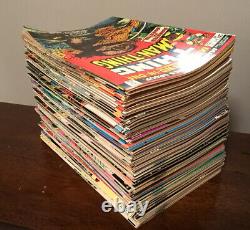 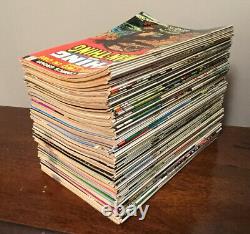 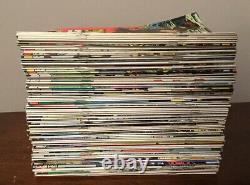 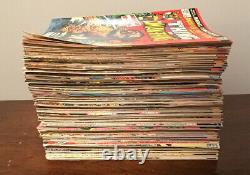 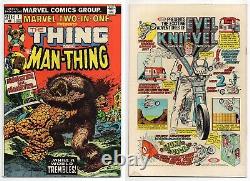 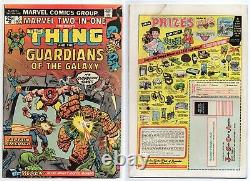 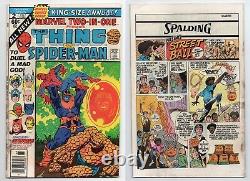 Lots of guest characters who team up with the Thing throughout the series from A-listers to F-listers Aquarian? Including Captain America, the Avengers, Guardians of the Galaxy, Moon Knight, Ghost Rider, Deathlok, you get a really wide range of characters from across the Marvel Universe. Issue 1 has a minor fold across the lower-right area of the cover (you can see it sitting up in the photos of the stack and there is some light color-break across the fold) as well as a small stain to the back cover at the bottom edge in the lower-left corner.

Because the books were stored unbagged, a few more significant environmental flaws befell certain issues, with the worst being some smoke or fire damage to Annual 2, one of the more sought after books in the run because of the tie-in with Jim Starlin's epic Thanos saga. Unfortunately, this issue was stored in a separate box which encountered close contact with a small house fire and shows some obvious cosmetic damage because of that (see scans). Additionally, issues 5, 16, 17, and 76 have some moderate water damage which has rippled the affected areas of the covers and left some light discoloration stains with issue 5 being the worst casualty (see scans). Beyond that, just as a general assessment, I'd say the majority of the books beyond those significant flaws probably fall in the Very Fine range, give or take, with most presenting nicely and showing only minor hints of reader use.

O major damage on any issue aside from what was already detailed, so no writing, large tears, heavy folds, loose staples or pages, spine splits, tape, color touch-up or other restoration, cut-outs of interior pages, etc. I'd rate the page quality as off-white to white and all are still very crisp and readable. This run came from a family member's massive collection, comprising virtually every Marvel or DC title from the mid-60's until the early 80's, and he's finally decided to let them go. The color preservation on these copies is excellent as they were kept out of sun or interior light almost since publication.

This item is in the category "Collectibles\Comics\Bronze Age (1970-83)\Superhero\Other Bronze Age Superheroes". The seller is "qburt" and is located in Buford, Georgia. This item can be shipped to United States, Canada.