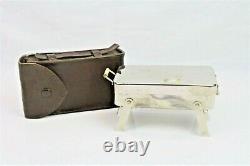 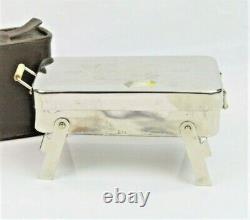 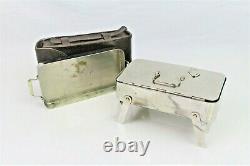 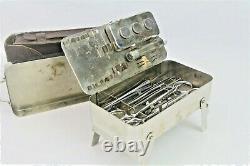 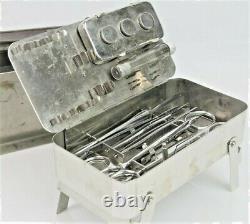 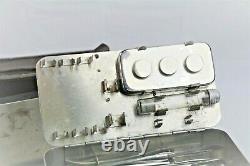 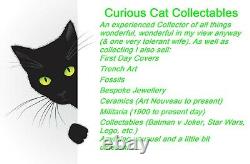 Very Rare World War One German Field Surgeons Kit + Original Leather Case. The case is stamped DRGM =. Deutsches Reichs Gebrauchs Muster =. German Empire usage pattern, equivalent of the British military broad arrow mark on equipment. This is a very rare (first I have come across) World War One German filed surgeons kit, which includes the original leather pouch. The pouch has stamped on it the initials DRGM, which stands for in German. In English this translates roughly as. German Empire Usage Pattern, which is the equivalent of the British military broad arrow mark on equipment. It is certainly World War One and therefore an antique, and seems near complete re confidence, i. Sterilizing burner, scalpels, clamps, scissors, glass tube vials for injections, etc. Just see images for more details of items. These kits and cases didnt survive the battles in the most terrible conditions we have every faced, in places it was so muddy there were areas of mud so deep soldiers and horses would sink to their deaths. But the constant exploding shrapnel shells used constantly by all sides took a dreadful toll in life, but many, many more were injured. Along with shrapnel there was millions of bullets whizzing through the air looking for bodies to destroy and lets not forget the hand to hand trench warfare that went on, bayonets ripping into flesh. Every German Unit had field first aiders and stretcher-bearers, but there was usually a Doctor too with a field kit, he would go onto the battle field and into trenches where there were always severally injured. It was clear from the outset of hostilities that if such casualties did not get immediate treatment to prevent catastrophic blood loss, to protect airways after severe burns, to issue lifesaving pain management, etc. They would never make it to the field-hospitals that were establish well behind the front lines. That is why such portable medical kits were limited in their contents as they were only designed for immediate lifesaving treatment to keep people alive long enough to get them to the field-hospital. Unfortunately many could not be saved and were allowed to pass with minimal pain as they would be give very large doses of Morphine, allowing them to pass as peacefully as possible.

The reason most of these medical kits didnt survive was because they werent used in the controlled environments of the field-hospitals, they were taken to the actual field of battle, many were used and just left, many were destroyed along with the Doctor as the fighting continued, and once the war was over huge amounts of equipment was simply abandoned by the German Military. Please be patient, we promise to get your item to you as soon as humanly possible. I cannot guarantee when this will be but it will be as soon as we can under the current circumstances & restrictions. The item "Very Rare WW1 German Near Complete Field Surgeons Kit + Original Leather Case" is in sale since Saturday, October 17, 2020. This item is in the category "Collectables\Militaria\World War I (1914-1918)\Field Gear".