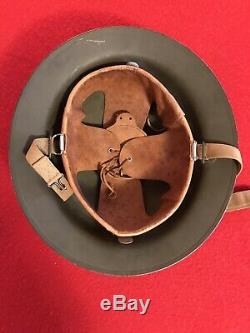 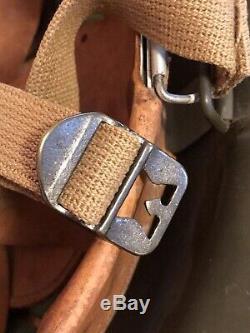 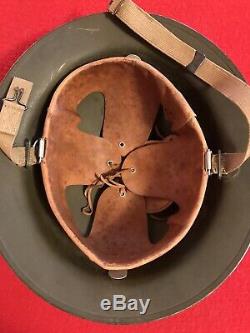 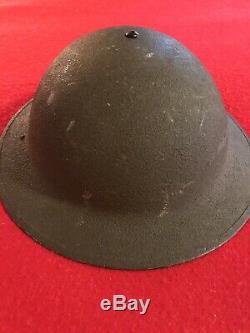 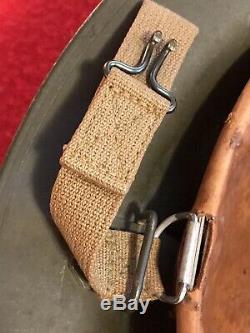 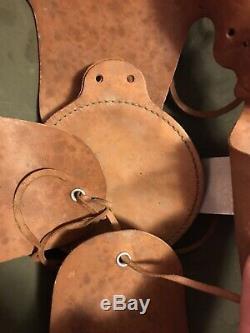 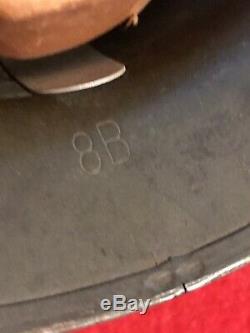 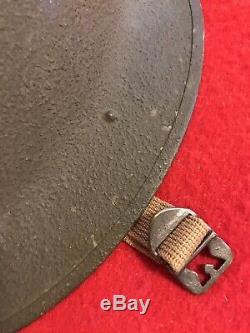 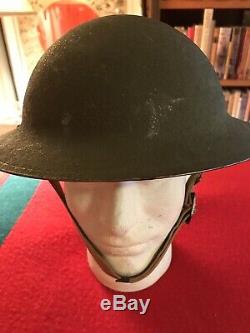 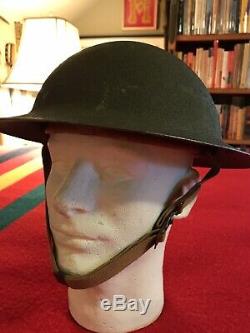 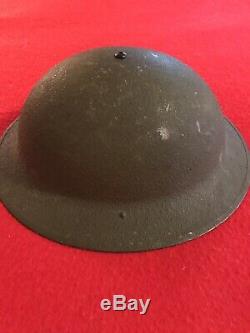 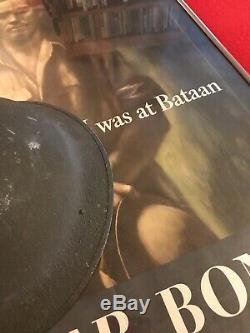 This was THE Helmet we went to war in! This is a true McCORD RADIATOR & MANUFACTURING Helmet contracts which had a one or two-digit number followed by a single letter under the brim at the seam (see the 8B stamped under the brim) and a BURNT-CORK PAINT FINISH rather than the sawdust used on the WW1 helmets. These new production helmets with the new Liner / conversions were ONLY made before the war for three months: from FEBRUARY to MAY 1941.

This M1917A1 was the HELMET worn on at Pearl Harbor, Wake Island, Bataan, and Corregidor when the nation first engaged the combined armed forces of the Empire of Japan. Detachment deployed to Iceland wore this M1917A1. Bluejacket Gun Crews aboard destroyers, cruisers, battleships, and carriers wore this M1917A1 at Battle Stations. This M1917A1 Helmet was also issued and worn by the FREE FRENCH FORCES fighting in North Africa!

Absolutely MINT mustard-khaki CHINSTRAP with the cast brass BUCKLE. ZERO corrosion to the STEEL LINER FRAME! ZERO tears, fraying, cracks, or dry rot to the LEATHER LINER! Typically the leather LINER fails first where it folds over the STEEL BAND that encircles the head. The CROWN PAD, often missing, is present and in MINT condition as is the LACE.

This Helmet was issued but appears NEVER to have been worn! The PAD has never been laced in place. Nor is there any evidence of LINER contact with skin oil or hair dressing commonly used in the 1930s and 40s. EXCELLENT Paint inside and out! Barely visible in tiny, faint 1/4 block letters on one of the leather ears is the name RASMUSSEN has been penciled.

This is a REALLY nice example! In 1917, when the US entered WWI a new model helmet was adopted. The M1917 was a copy of the British Brodie helmet but it soon became apparent that the design had some major flaws, of which poor side and rear protection and its innate instability were the most significant. To address this second issue a new suspension system was designed, and in early 1936 a Field Modification Order was dispatched, ordering that all M1917 helmets were to be fitted with the new suspension setup and a new chinstrap. These modified helmets were designatedM1917A1 by the US military.

The new suspension system was made of steel strips, padded with leather and with a leather pad in the crown. The new chinstraps were made of khaki webbing, and closed with a hook and arrow buckle. The same chinstrap would later be fitted to the new M1 helmet. It was looped through the bales of the shell and then sewn to the loops fixed to the suspension itself. As the US moved closer to war the Rock Island Arsenal issued a contract in 1940 to the McCord Radiator and Manufacturing Corporation for approximately 2 million M1917A1 helmets. After 900.000 new helmets had been delivered the rest of the contract was terminated in favour of the new M1 combat helmet. The helmets of the 1940 contract have "17A" stamped behind the rim seam. The absence of that mark on this helmet indicate that it is one of the originally converted types. Although a throwback to WWI and considered obsolete at the time, theM1917A1 helmet was the primary combat helmet for the US forces in early WWII. For interest 2 pictures of US Marines in the Pacific wearing these helmets are attached, one of which shows Marines wearing a mix of M1917A1 and M1 helmets in early 1942. The M1917A1 helmet was made of manganese steel painted lusterless olive drab, with a sawdust anti-reflective texture. A leather liner with hair-filled pads and two-piece canvas webbing chinstrap (with brass hook and buckle) made the updated version far more comfortable and sturdier than the M1917 original. A small nut at the apex of the helmet holds the liner in place.